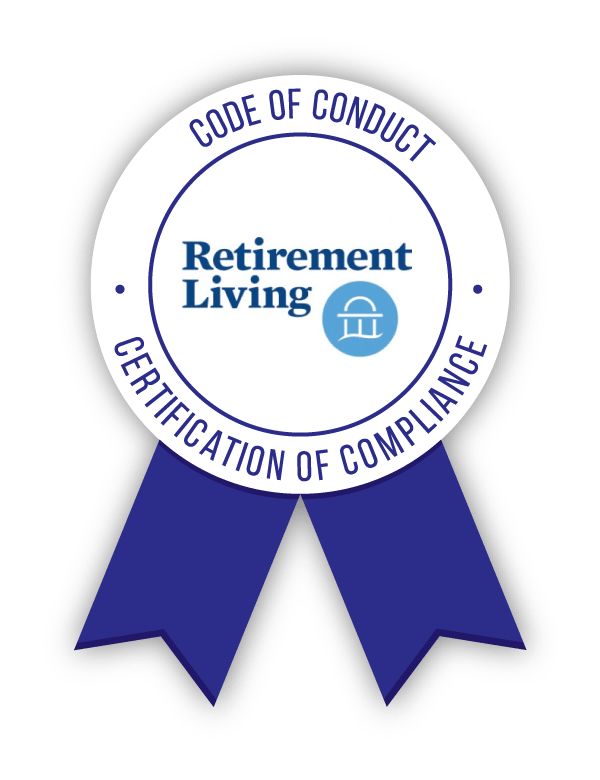 Pre-Registration for the Code of Conduct

By completing this pre-registration form, you are affirming your company’s intent to sign up to the Retirement Living Code of Conduct.
When formal registrations go live later in 2019, you will be invited to officially complete your registration and become a Code subscriber. Please note that there will be a cost for subscribing to the Code as part of the registration completion process. There is no cost for completing this pre-registration form.
We will also provide you with additional information and resources as they become available, including final Code pricing, ‘how to’ guides and training courses.

Would you like to speak with an aged care specialist?

We are here to help.

Lauren has worked in the healthcare industry for over 15 years from clinical to senior managerial roles across acute, palliative care and aged care services. A highlight of her career was setting up a community dementia care service at one of the leading private hospitals in Victoria.

A previous young Melbourne Hub Shaper, an initiative of the World Economic Forum and a Masters of Health of Human Services Management graduate. In 2017, she was awarded as one of Australian Financial Reviews Westpac 100 Women of Influence.

Lauren has established the CarePage and HelloCare to drive improved quality of care for the elderly through data collection and analytics tools in the aged care and retirement village sector. She founded Aged Care Report Card Pty Ltd back in 2014 that was the genesis of the innovation that is shaping the market today.

Lauren has spoken at numerous events on aged care and recently spoke at the Australian Davos Connection www.adcforum.org annual Australian Leadership Retreat in QLD, and Ageing Asia in Singapore on ageing and the importance of listening to the consumer, residents, and staff or other stakeholders on a regular basis and using innovation to enable the best experience possible.

Stephen has served as a Director on listed and unlisted public companies and various private ventures over the past 20 years. He has led the sourcing, structure and financing on numerous projects both in Australia and around the region.

Stephen has lead the recent investments by CarePage in www.feedbackly.com and also the partnership recently announced with www.ageingasia.com that seek to bring customer experience and customer journey best practise to Australia and from Australia to the world.

He is passionate about data, data science and the power of engaging with data to inform stakeholders and leaders to make evidence-based decisions. Stephen has lead investments and ventures into SaaS businesses that utilise data for benchmarking, analytics and predictive tools across the health sector and digital media sectors. Stephen was a seed investor in www.gonitro.com (Nitro) that will this year list on the ASX and now has over 200 people worldwide. He has been involved in scaling a number of software and consumer based businesses across Australia, Asia and the broader region. He is active in social impact investment. Stephen has had a long-term involvement with the global leadership networks; ADC Forum; World Economic Forum; and Young Presidents Organisation in various capacities. Stephen was previously a director of the Australian Institute of Management (Victoria/Tasmania).

Over twenty years Martin has worked ‘hand on’ in IT roles ranging from operational to executive consulting. His focus is on  technology architecture, especially in the field of data analytics. Prior to joining CarePage, his recent achievements include leading cloud service adoption through the BI team at DHHS and leading the enterprise Power BI roll-out at RMIT.

With over ten years aged care sector experience in Australia and the UK, Janine maintains a personal understanding of reforms and sector intra-dynamics. A recent addition to the CarePage team, Janine’s role sees her bring experience in consumer co-design, customer journey mapping, and change management to support clients achieve success as they roll-out out CarePage software.

Val was a founding adviser and ambassador for CarePage’s Responsible Care Initiative. Sadly on the 12th March 2020, Val died peacefully with her family by her side.

Many of you will know her for the inspiring, determined change-maker that she was.

Val played an important role in shaping many positives in the aged care environment that exist today; her legacy lives on protecting carers and families despite the sectors ongoing challenges.

Val’s was previously the President of Older People Speaks Out/ AM M.Lit.Stud BA.

A journalist by profession and by inclination. Co-founder and foundation President of the Queensland Council of Carers (Carers Queensland) and one of the Founders of the first National Carers Association. She established Older People Speak Out at the media’s request to represent and connect older people’s organisations and the media in 1993 and has been President ever since.

Val was Queensland Chairperson of: the Commonwealth Consumer Forum for the Aged; The Older Australians Advisory Council; and The Nursing Homes Appeals Committee. Val was a member of the Retirement Village Accreditation Committee and a surveyor for nine years, and the Chairperson of the Ministerial Advisory Council of Older Persons on which she served under various Ministers for five years.

Jim is an ambassador for our Responsible Care Initiative.

Jim is the President of Carers Queensland. He is a member of the Australian Institute of Company Directors, a Fellow of the Australian Institute of Management, an appointee to the State Government Health and Community Services Industry Standing Committee, and a Justice of the Peace.
Jim was recognized by the Public Relations Institute of Australia in 2005 via the prestigious Gold Award for handling one of the most challenging corporate communications exercises in aged care history. Prior to consulting, Jim was for 10 years the Chief Executive of one of Australia’s largest aged care retirement living and community care providers, TriCare.
Jim has provided policy advice to Federal and State Governments. He sits on the Health and Community Services Industry Standing Committee and is also a Director of the RSPCA Queensland Board since March 2013.

February 15 2021
It's the question on everyone's lips as coronavirus vaccines make their way around the world... The vaccine is here, now what?

February 15 2021
The first shipment of coronavirus vaccines in Australia landed early this afternoon on a Singapore... February 15 2021
Brothers who had been bankrupted and banned from the poultry industry for animal cruelty surresptitiously...

Read what the elderly, their families and health professionals are saying about your aged care service or facility! Gain insight into how your company compares to others in your area, state or nationally. Join ACRC today and communicate to your reviewers. Through our suite of management tools we can help with providing you full visibility of how well you service is doing.